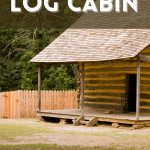 A Labour of Love

This article on restoring a heritage log cabin is a reprint from Mother Earth News, written by Victoria Gazeley. You can also read her follow-up article, "Renovate a Heritage Log Cabin Interior - DIY Style".

Restoring a heritage log cabin isn’t something I set out to do.  It was never a grand life goal, or something I thought I might like to do ‘someday’.  It just happened, and now, 12 years later, I’m so glad it did.

Here’s how we did it.

Sometime in the late 1990s, my father was traipsing around in the woods outside our family’s property and came across an old, original homesteader’s log cabin sitting on what at one time must have been a sunny knoll.  Now surrounded by fully grown trees and covered with moss, the building was probably a year away from the roof collapsing and the whole thing rotting into the ground.

It was remarkable it was still intact, as most of the old homesteading cabins in our neck of the woods fell to the ground decades ago.  But for some reason, this one, built in the early 1930s (according to local records) and left abandoned for 40 years, was still standing.  Incredible.  And, I thought, a sign.

My dad told me about the building, and being a bit of a heritage buff, asked him to show it to me on one of my weekend visits.  Well, one look and I was hooked.  You know those moments when you seem get a ‘download’ from above, when you just know that there is something you simply have to do?  This was one of those moments.

“Let’s restore it!” I said, entranced by just the thought of bringing a historical building back from the brink.  In return I got a look that oozed, “Are you nuts?”

Once the incredulous vibe subsided, we talked about it and discussed the possibility of approaching the owner of the 45 acre property the old cabin sat on to see if he might be willing to sell the entire piece.  I located the owner, asked if he might be interested in selling the property, and got an ‘absolutely not’ in response.  But not one to be foiled, I thought I’d try another approach.

“Would you be interested in selling the old cabin?”

The ‘yes’ didn’t come right away, but after a bit of time, I met with Mr. D at a coffee shop and signed some very informal paperwork selling me the building.  $150 cash, and I was the proud owner of a mossy, falling down, hand hewn log cabin.

Before I bought the old building, my parents and I had long discussions about how we could get it from where it sat down to our family property.

Basically, it came down to numbering each hand-hewn log with a coding system,taking it apart piece by piece (which turned out to be the simplest part – it basically just fell over with a push), and moving the pieces a few hundred feet north to the new building site.  Sounded simple enough – until the property owner mentioned he didn’t want any trees removed or trails widened.  More challenging?  A tad.

After a bit of brainstorming, we decided the simplest solution would be to pull the cabin out of the bush via a cable attached to an ATV.  One… piece… at… a… time.   Not terribly efficient, but it got the job done over a weekend.

Once all the logs were moved to the new building site, they were piled and covered for an entire year to let them ‘dry out’ a bit.  As wood tends to swell and shrink depending on moisture content, and this building had been abandoned for 40 years with a decomposing roof, the logs were pretty much wet through.  And HEAVY, which would make reassembly more cumbersome.

Before reassembling the logs, any areas of rot were removed with a chainsaw, using the rounded end of the blade to ‘carve’ out any punkiness.  Remarkably, there were few of these spots to remove – a testament to the amazing resiliency of our native western red cedar.  We only had to replace the very bottom logs that essentially had been sitting on the dirt in the original building – the rest of the logs were almost entirely sound.

Finally, each log was cleaned using a home model pressure washer to remove the years of algae and dirt that had affixed to the wood surface.  As you can see in the photos, the difference is amazing!

Step 4 – Put it All Back Together Again

Here’s where the real work started.  For a variety of reasons, we decided to put the building on a platform rather than a foundation:

This decision has served us well over the years by providing a crawlspace for storage, plumbing, etc., but there are a few drawbacks:

Once the logs were cleaned and prepared, the job of reassembly kicked into high gear.  As you can imagine (and see in the photos), this was a bit of a chore.  And as is always the case when you think everything is going swimmingly, we found that some of the inventory numbers had rubbed off some of the logs on their way from one site to the other.  Needless to say, there was much reviewing of photographs and trying logs this way and that.  Kind of like a giant jigsaw.  A really heavy jigsaw puzzle!

The logs were reassembled using a winching system, lots of muscle, and a tonne of building experience on the part of my dad.  It truly was a labour of love.

Finally, to make the cabin more ‘modern’ to accommodate a kitchen and a bathroom, we added a shed-roof addition on one side, and increased the pitch of the roof from the original in order to fit in a sleeping loft.  The original building was two rooms and a storage loft – we thought we’d need a bit more space than that.

Once the building was complete, we installed some antique wood windows (single pane, unfortunately), added the back sitting porch, nailed in the window and interior trim, and had a chinking party to do the exterior chinking using a traditional ‘recipe’ of cedar sawdust, cement and water.  Over a decade later, the exterior chinking is still solid.  The interior chinking, however, has dried out from the continuous heating, cooling and dampness of winters here and is falling out in chunks.  I know what I’ll be doing this year!

The doors came from a used building supply store, and we managed to repurpose the original cabin’s front door, complete with the owner’s initials, as our bathroom door.  I love the additional sense of history it brings – the whole building is a conversation piece, but that door is in a whole other category.  I simply adore it.

Over the years, the cabin has been a rental, a home for my brother in his younger years, and a family gathering place.  Friends have stayed here on retreat, we’ve had a wedding and multiple birthday parties.  When we moved in in 2009, it had gone through a major renovation, which only served to add to its charm.

It’s been an incredible gift for our entire family, our friends, and everyone who sees it.  There’s just something about this building that exudes ‘cozy’ and a whole lotta love.  Maybe it’s all the handwork that went into it, both originally and in the rebuild.  Maybe it’s the location.  I don’t know.  All I know is that it’s a blessing, and I absolutely love living here.

If you can find an old cabin and have the team available to help you restore it, my recommendation would be ‘go for it’!  You’ll be very, very happy you did.

This article on restoring a heritage log cabin is a reprint from Mother Earth News, written by Victoria Gazeley. You can also read her follow-up article, "Renovate a Heritage Log Cabin Interior - DIY Style".

Log Cabin FAQs Answers to many log cabin FAQs and other questions about building with logs and timbers.

Get a Log Home Education Getting a log home education involves utilizing the many cabin resources available.

How to Build and Furnish a Log Cabin: The Easy, Natural Way Using Only Hand Tools and the Woods Around You
$16.45
Buy on Amazon
Bestseller No. 2

The Log Cabin Book: A Complete Builder's Guide to Small Homes and Shelters
$11.69
Buy on Amazon
Bestseller No. 4

Log Cabins and Outbuildings: A Guide to Building Homes, Barns, Greenhouses, and More
$12.99
Buy on Amazon
SaleBestseller No. 5